Recently I’ve been consuming copious amounts of LOTR and it triggered the memory of a realization I came to about a year ago. I had accompanied my roommate to a party thrown by her lab, overflowing with analytical chemists. The big news circulating the party was that “The Hobbit” would now be released in three parts instead of two. This was received with some trepidation that the story would be unnecessarily drawn out, countered with more intel that actually the footage would include appendices from the LOTR trilogy to beef up the plot. And yes, I did contribute quite a bit to this conversation. That’s mainly because I had participated in the exact same conversation earlier that day with the people in my lab (an organic lab).

This led to the realization that lab conversations, as they are conducted by similarly science minded people, are probably not as unique as I might have thought. In fact maybe my concerns and yet barely contained excitement for the forthcoming “Ender’s Game” movie are being expressed right now in another lab. All of this to say, I’ve been inspired to put this list together:

You know you’re in a chemistry lab if…

-Someone nearby is quoting from Futurama, Arrested Development, The Simpsons, LOTR, Firefly or Battlestar Galactica and at least one other person recognizes it almost immediately

-It takes approximately 3-5 minutes to clear the room when the fire alarm goes off, but only 15 seconds if someone announces “free food” – if you’ve missed the aforementioned announcement no one is coming back for you

-You joke about getting cancer in your old age from exposure to chemicals in lab, but when you accidentally spill half a liter of DCM on your arms, your worry secretly grows 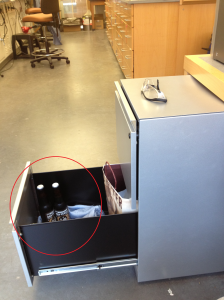 -Half of the people around you are listening to podcasts in their headphones, and probably the same one

-Survival plans in case of a zombie apocalypse have been seriously discussed, specifically if basic chemistry knowledge will or will not be helpful post-Armageddon

This may vary as I have of course based this off of my own experiences in a single lab space for the past four years with the same people. I’d be delighted to hear your own staples of lab life, pleasant or not, you choose, just comment here or use #youknowyouareinlabif on twitter!