First, I’d like us all to agree that 1) Battlestar Galactica is a captivating, beautifully crafted series that explores the intricacies and limits of humanity and 2) that no actress has ever fully embodied a character as much as Katee Sackhoff has with Starbuck. However, like most successful works of science fiction, they have taken certain liberties with the laws of physics and science at large. As a dedicated fan of the show I have participated in more than a few discussions of its storyline, logistical and moral quandaries, mostly with my labmate Dale, a post-doc and fellow BSG analyst. Here’s one example of pretty blatant science side-stepping. (FTL travel will be accepted as fact for the purposes of this post).

How are they simulating gravity?  The show never addresses this fundamental force that allows the characters to walk around in their daily lives aboard the ship. Gravity can only be simulated in 3 ways: By a large object with inertial mass (i.e. planet), by rotation of the spaceship which acts through the simultaneous effects of centrifugal and centripetal force (see Newton’s third law), or by linear acceleration. Although it’s possible the fleet could be using this last strategy, the careful viewer will realize that many times the Battlestar has been forced to hold its position as it waits for returning vipers in order to make a jump. And they always seem to jump to specific coordinates, so to use linear acceleration they’d also have to tell the fleet which direction to continue heading upon arrival. 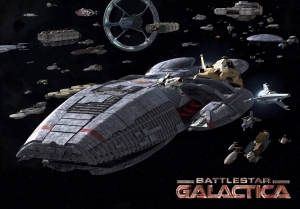 So according to this picture, only the circular ship in the top middle is likely to have full-time gravity. You can sign me up for that one.. bone and muscle deterioration? No thanks.

This just happens to be a pet peeve of mine and there are many more examples so certainly add more as you please! A quick google search turned up this book, an official guide to the science of Battlestar Galactica for those compelled to research this topic further (on my reading list now). The fact that most of the technology supporting the fleet’s survival is currently not in existence, I think takes nothing away from personal enjoyment of the series. Really, it challenges us to test the limits of our imaginations and what we might achieve even beyond the confines of this world.  So say we all.

Update: after sleeping on this post, I realized this was supposed to be chemistry themed not physics..I just got excited about BSG and totally forgot where I started.. hope everyone doesn’t mind too much!